Zimbabwe is Not Safe, No Deportations, No Home Office/Embassy Intimidation 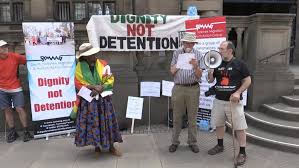 People who were at Vulcan House today said they wanted to demonstrate our opposition to these threats.

This has happened at other Home Office buildings in the UK and appears to be part of a “redocumentation” process to make deportation to Zimbabwe possible. The UK government has had an uncritical relationship with the new Zimbabwean government of Emmerson Mnangagwa and discussed the possible deportation of 2500 Zimbabwean refugees from the UK. The fact that a Zimbabwean Embassy official was invited – without a Home Office rep being present – to question Zimbabwean refugees suggests a close relationship between UK and Zimbabwean authorities. This relationship was described as “corrupt” by one Zimbabwean woman who was questioned by the Embassy official (who refused to give his name) today.

As one Zimbabwean refugee who was questioned today said “Why is the Home Office giving this person my file? How do I know my family is safe now in Zimbabwe?”

Join us on UN Human Rights Day to say

Zimbabwe is still not safe. No deportations to Zimbabwe. Stop Home Office and Zimbabwean Embassy intimidation of asylum seekers.