We’re not frightened anymore – Sheffield says no to Zimbabwe Deportations 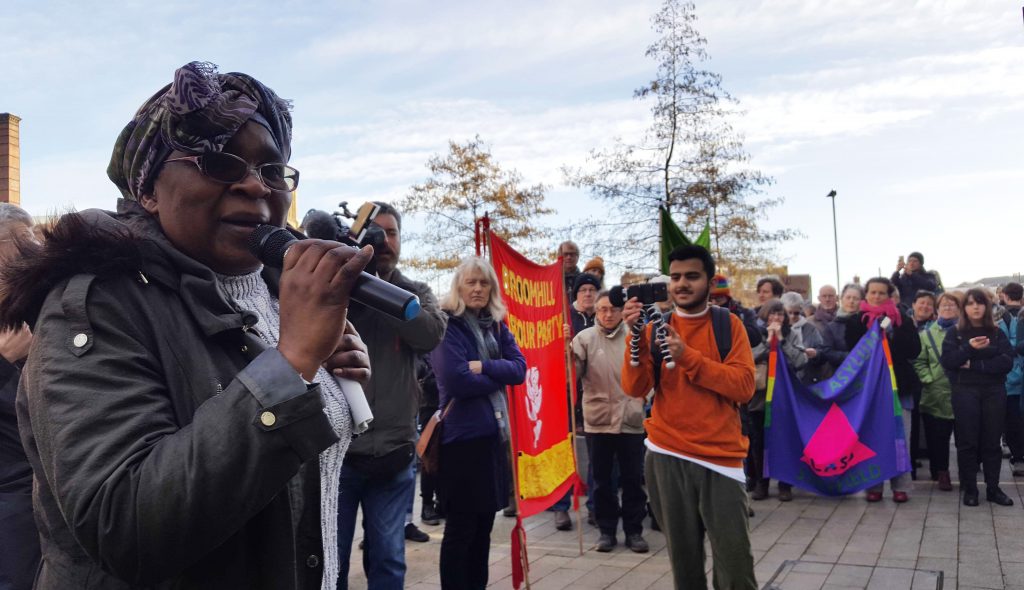 I have never been on a demonstration at 9am on a Tuesday morning before. Would everybody else be at work or in bed? Would more than 2 people and a dog turn up? But my worries were small compared to the anxiety that Marian was feeling today.

Marian Machekanyanga is a Zimbabwean asylum seeker living in Sheffield. Marian was called by the Home Office to report at Vulcan House (the local branch of the Home Office in Sheffield) at 9am. The last time she reported at Vulcan House she – and other people – were questioned by a Zimbabwean Embassy official, invited there by the Home Office. Two Zimbabweans were detained and sent to Morton Hall detention centre straight after, threatened with deportation to Zimbabwe where violence against political opponents is at its worst for many years.

Marian and others Zimbabwean asylum seekers asked for support. So South Yorkshire Migration and Asylum Action Group (SYMAAG) organised a demonstration outside Vulcan House, at the same time Marian was inside reporting to the Home Office, fearing that she might never come out of the front door. The response was big, even by Sheffield standards. 200 people chanted “Marian belongs in Sheffield” “No deportations to Zimbabwe” while security staff at the Home Office reporting centre looked out sheepishly. Marian was inside for just a few minutes and came out of the front door to cheers.

“I’m not frightened anymore” Marian told the crowd, going on to say that she was humbled by the support she’d had and telling us how she loved Sheffield. But Marian reminded us that other Zimbabwean asylum seekers – including Khuzani Ndlovu and Benji Gudza – were still detained at Morton Hall under threat of deportation.

Victor Mujakachi spoke next. Victor had also been detained and released after a campaign by his many friends and supporters – a petition for his release has gathered a remarkable 75,000 signatures in a week.

He stressed the need to support others detained at Morton Hall who were less well-known and connected than him.

Other speakers including Phillis Andrew from SYMAAG talked from personal experience about what detention centres are and how they are some of the most hostile places in the hostile environment for people seeking asylum. The apparent cosiness between the UK government and Zimbabwean dictatorship was a theme for other speakers.

So what did we achieve today? Marian is safe for now, she’s laughing with her friends and eating carrot cake downstairs at The Sanctuary asylum seeker drop in as I write this. But she’s due to report at Vulcan House within 2 weeks.

Victor was released. It took a campaign combining public protests, parliamentary questions, legal support, national media coverage including a very brave Channel 4 interview, a Guardian newspaper front page, a feature in the Independent, widespread local media and a social media campaign which reached new audiences. But there are still Zimbabwean people in detention. The Home Office has invited Zimbabwean Embassy officials to question Zimbabwean asylum seekers around the country. The UK government has still not – as it did between 2002 and 2010 – suspended deportations to Zimbabwe because of ‘political and humanitarian factors’ there.

I think the most important thing this week’s campaign has achieved is how we have surprised ourselves: 200 people did turn out to a morning demo in the winter, perhaps we underestimate support for refugees; Marian and others – for the first time in their lives – have told their story in national TV and newspaper interviews; the Home Office are clearly disturbed by the intensity and reach of our campaign. Victor was released from detention. Refugees in SYMAAG and other organisations have spoken out with a new confidence and authority.

The Home Office’s ongoing attempt to detain and deport high-profile, much-loved activists to Zimbabwe at a time when it is patently not safe felt like a challenge. I’m pleased we rose to that challenge this last week.

I hope that the energy and optimism generated is the basis for future campaigns against detention and deportation alongside people who are not as well known as Victor and Marian. This week we’ll be meeting to discuss what kind of alliances we need to make in Sheffield to maintain this momentum. But right now, I’m going downstairs for some carrot cake.

This article by Stuart Crosthwaite was originally published on Right to Remain’s blog https://righttoremain.org.uk/were-not-frightened-anymore-sheffield-says-no-to-zimbabwe-deportations/19 Feb