We Don’t Want a “Hostile Environment” Stop the Immigration Bill 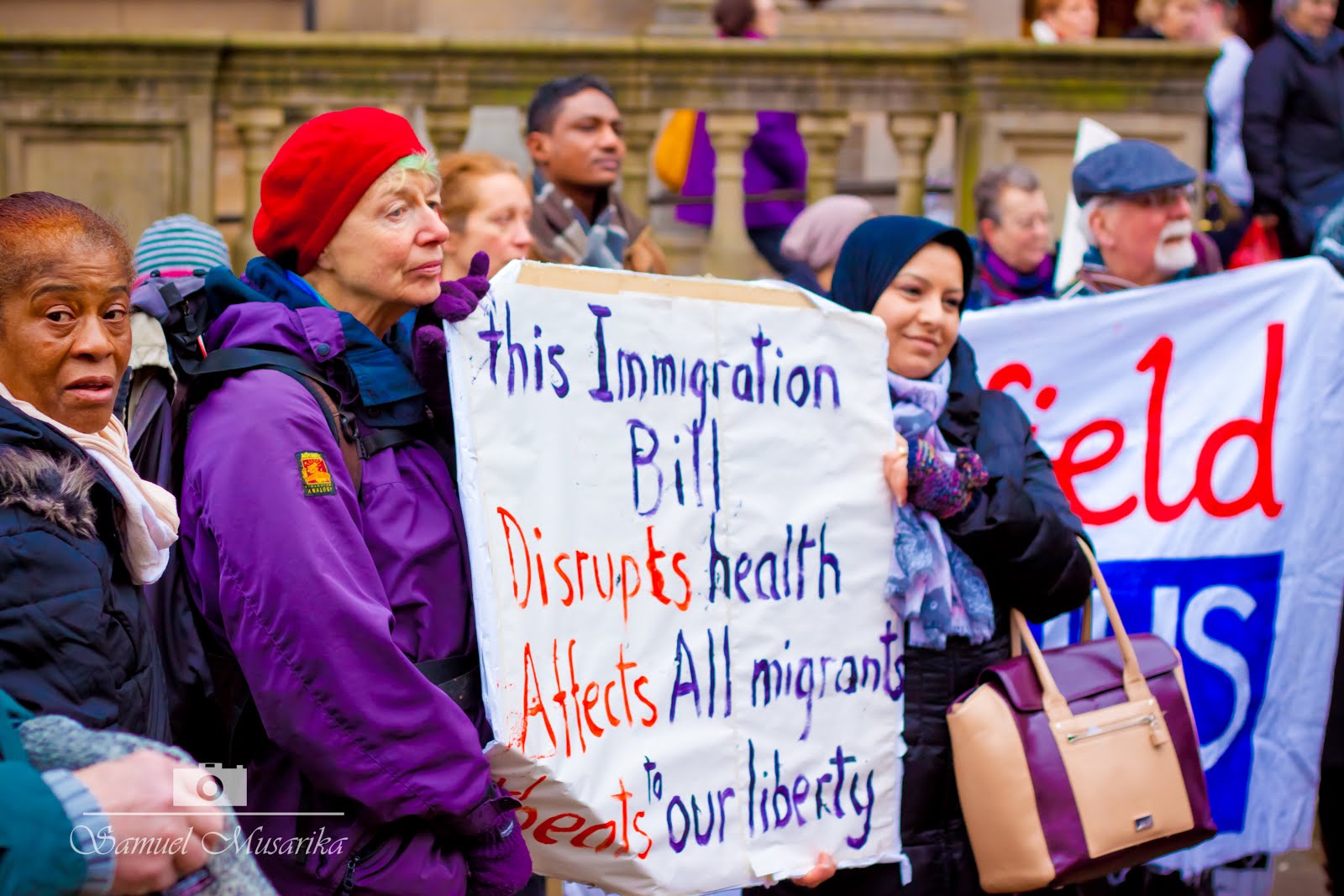 The Bill now is in the House of Lords where it will receive its second reading on Monday 10 February. The second Reading is an opportunity for Peers to raise concerns and discus any aspect of the Bill, including issues which they believe should be included in
the legislation.

Under attack from the right wing of the Tory party and from our side, government are now in a state of paralysis over the Immigration Bill. Andrew Lansley, leader of the House of Commons, said the Immigration Bill is ‘subject to the progress of further business’. In practice this means that the Bill is unlikely to make any further progress until February. On January 16th Lansley explained that the Bill would progress “in due course”. This gives us more time to oppose it before further consideration in the House of Lords and House of Commons.

The Movement Against Xenophobia organised a meeting in the House of Commons on 15th January (with speakers including David Price, chair SYMAAG) The meeting aimed to brief parliamentarians on the likely results if the Bill becomes law and was very well attended as the picture below shows. Brief reports of the meeting are on Twitter at #stoptheimmigrationbill   A full report of the meeting will follow.

Movement Against Xenophobia meeting on Immigration Bill at House of Lords

Tell Your MP: Vote Against the Immigration Bill

SYMAAG urges you to contact your MP to ask them to vote against the Bill when it is discussed again. Many Labour MPs, in particular, clearly oppose the Bill but have been instructed to abstain, not vote against. We urge them to join those principled MPs who did vote against these proposals. We have drawn up a downloadable model letter at immigrationbillmodelletter311213 You can easily find your MP’s contact details here – just enter your postcode. Please let us know if you get a response from your MP

Opposition to creating a “hostile environment”

The Bill, described by one MP as “the most racist piece of legislation I have seen in 30 years” aims to create a “hostile environment” for what Theresa May calls “illegal migrants”. In practice it will lead to racial profiling as healthworkers and landlords and are left to assess people’s immigration status before they are allowed to access services or to rent a house. Appeal rights are to be reduced, despite a third of appeals succeeding in challenging wrong initial decisions on asylum claims. There is opposition to the Bill: migrant and human rights groups, organisations representing healthworkers, landlords and the UK’s biggest trade union UNITE. The UNHCR recently condemned the Bill as creating “a climate of ethnic profiling” and saying that it “stigmatised refugees in the public mind”.

Sheffield meeting: “I’m a doctor not a border guard”

SYMAAG has organised against the bill since its announcement. On October 29th we held a public meeting in Sheffield attended by 65 people including many healthworkers opposed to being compelled to check their patients’ immigration status: “I’m a doctor not a border guard” said one. A report of the Sheffield meeting from SYMAAG Executive Committee member and Development and Empowerment for Women’s Advancement chair Violet Dickenson is here at Migrant Rights to Healthcare publlic meeting report

Demonstration Against Immigration Bill in Sheffield

120 people showed their opposition to the Immigration Bill in Sheffield on December 18th on a demonstration organised by SYMAAG and supported by migrant rights groups from around the UK, unions including UNITE, the local Save Our NHS campaign, churches, Labour councillors, MP’s and the Green Party. The Sheffield Star newspaper reported the demonstration including a video with an interview of Green Party leader Natalie Bennett.

Pictures of Sheffield demo taken by Sam Musarika except picture on front page of website by Rebekah Morris. Thanks to Sam and Rebekah