Odette is back with us in Sheffield! 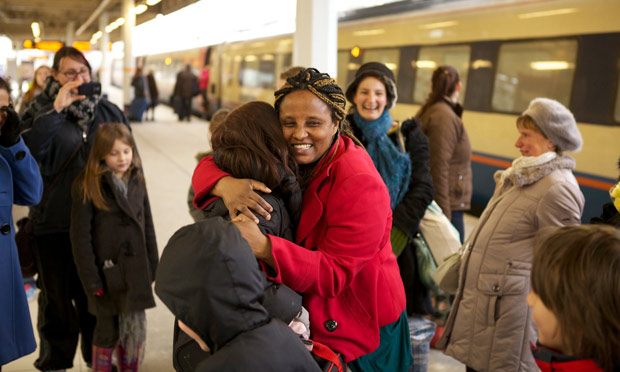 A determined community campaign has suceeeded in supporting Odette Sefuko and getting her released from Yarls Wood detention centre.

Odette Sefuko, Congolese campaigner against sexual violence, was detained by the UK Border Agency, who wanted to deport her to Uganda. While she was imprisoned at Yarls Wood detention (run by Serco) she was denied food because she refused to accept the identity/name given to her by UKBA/Serco! See previous articles about Odette on the SYMAAG website

Odette has been released on bail and her campaign is far from over but her case shows – once again – that a determined community campaign can successfully the injustice and abuse of asylum seekers practiced by UKBA and their profit-driven contractors like Serco, G4S, Capita, Reliance and the rest.

Marishka Van Steenbergen has been reporting on the story for the Guardian’s Northerner blog, Marishka’s latest article about Odette and the inhumanity of immigration detention is here

Kim Balmer, one of Odette’s supporters, said:
Odette’s six weeks at Yarl’s Wood highlights a system in which we have lost sight of human dignity and respect. For Odette this was far more than just a case of wrong identity. To Odette it was a death sentence, a return to the brutality and rape that William Hague is currently speaking against in his trip to the Congo.
Campaigner Peter Rowe said:
I think the only way to understand what has happened to Odette in the UK is that regrettably the politics of immigration has corrupted the due process of asylum. Someone in the middle ranks of government seems to have interpreted their brief to mean that a deportation is always a good result regardless of the circumstances. It has made our asylum process arbitrary and capricious – a kind of Kafkaesque nightmare for genuine asylum seekers like Odette.
Solicitors are now working hard to organise a DNA test with Sefuko’s sister and children, who have been recognised by the UNHCR as refugees from the DRC. The government’s current guidance on the DRC states that if an applicant is of Banyamulenge origin, granting of asylum is likely to be appropriate because they are in a vulnerable and insecure position and face persecution throughout the DRC.

Read the full article
Odette came to the UK five years ago, to seek safety and live a life free from persecution.
She is a fighter for minority rights and women’s rights in DR Congo, and now Odette is fighting for her right to sanctuary in the UK.

You can help this campaign for justice. Read more at the Facebook page, including how you can support the campaign.