How Mears are putting asylum tenants in danger 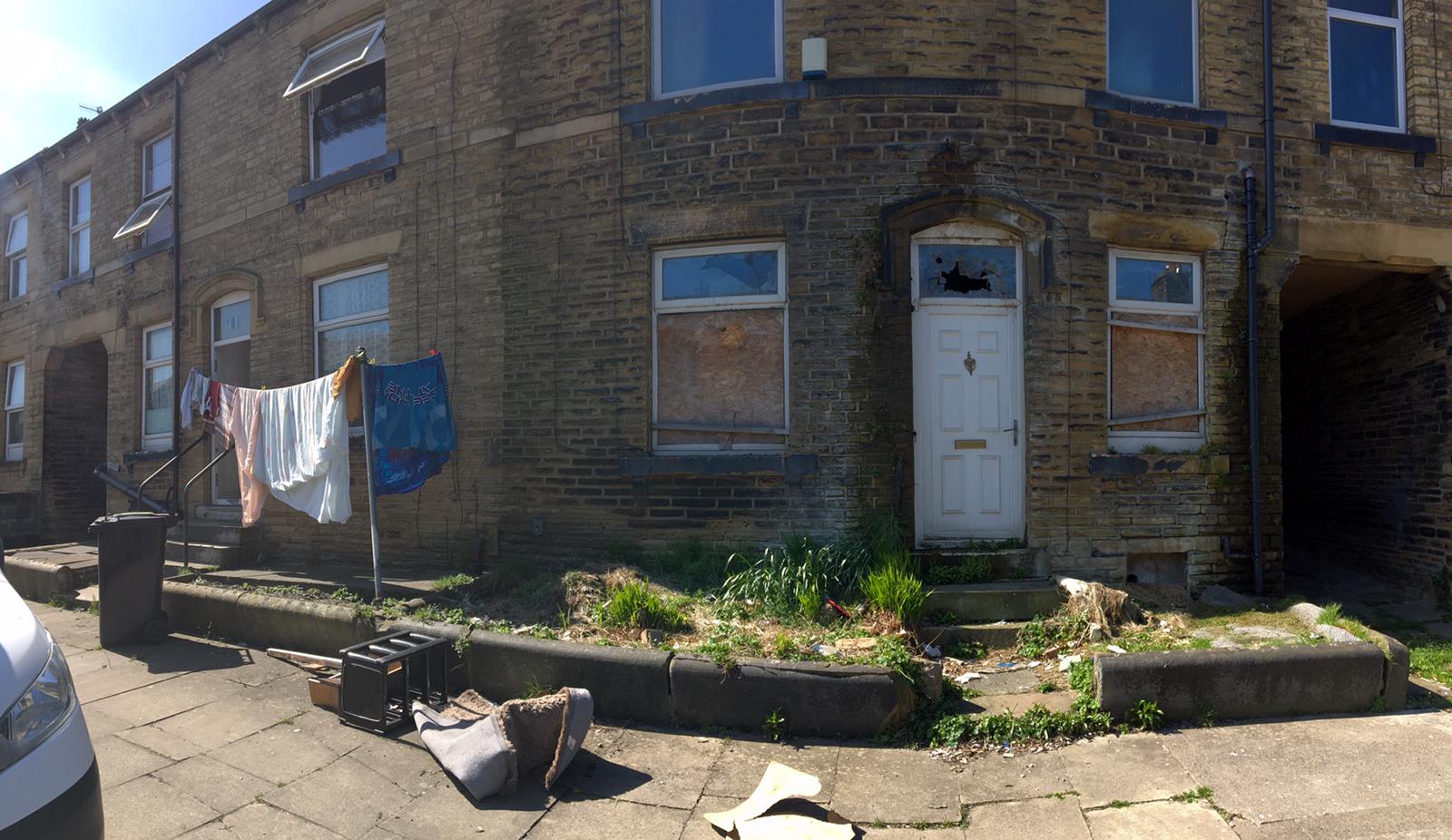 Along with asylum tenants, SYMAAG has long documented conditions in asylum housing in Yorkshire and the north east. We assumed that when Mears took over the asylum housing contract in our region from G4S in September 2019 things would improve. They haven’t.

Now in the midst of a pandemic, overcrowding and lack of hygiene are threats to the lives of asylum tenants and residents in Mears-run accommodation. We have called on Mears and the Home Office to urgently remedy this situation.

Here, John Grayson and Manuchehr M-D from SYMAAG investigate conditions in Mears accommodation and how Mears, Migrant Help and the Home Office are putting the lives of asylum tenants in danger.

As one resident said looking at this rubbish left yesterday 12 April near the
front entrance of Urban House “If they can’t manage rubbish, no wonder they
can’t manage Urban House”

Registration started again in Urban House on Sunday 12 April after no checks
for three weeks. Around 120 people were present for Sunday breakfast. The
registration list showed 180 people should have been in Urban House .Around
60 had left for the weekend or for longer with friends to escape infection in UH.
Some will return Tuesday others may not.
But the Home Office has told one man from Urban House, now with friends,
that he has to travel back to Urban House to register. Breaking all their own
stated rules on travel and Covid-19.

We have managed to get all but one pregnant woman out of Urban House. She
presented to nurses because she thought she was pregnant. Five weeks later they tested her and told her she was pregnant. We are pressing for her to be
moved near to the father of her child.

There are still many children in Urban House
Social distancing is very difficult where children are in queues or in shared
bathrooms etc. On Monday 13 April our estimate from inside Urban House is
that there are still 10 children at risk, under 10 years,4 children under 4 years
and a baby under 12 months. There are two older children of 13 and 14.

Up to the Easter weekend toilets in Urban House were used potentially by 180
people were cleaned only once a day. Now it is only twice a day. We checked the toilet 12noon on April 13. It was blocked.

PPE for staff but none for residents

Kitchen and canteen staff wear masks and gloves. Reception and security
wear masks and gloves, but they are often seen without them – around 20% of
the time they do not wear PPE.
In a policy statement released on 6 April Mears claimed that
“Mears are working closely with the staff at Urban House to ensure adequate
supplies of PPE are available to all users of the building”
On 13 April we were told from inside Urban House that no residents had been
offered masks or gloves.

There is no change, in that there are still two or three unrelated people sharing
rooms.

Still no translated information on Covid-19 from Mears for people in Urban
House
The 6 April Mears statement on Urban House said:
“We have written to all service users, in their native language as well as
speaking with them regularly face to face to make them aware of the
government’s advice to dealing with COVID-19”
On 13 April we were told from inside Urban House that no one had received
any written communication.

Dispersal from Urban House can be worse than staying there

On Friday 3 April two single men were ‘dispersed’ from Urban House to
houses in Stockton and Middlesbrough. They contacted us about the
condition of the properties

There were three other people in the Stockton house. There was no information in the house about coronavirus not even a notice board with a Migrant Help number. We had to give the man the number.
The Middlesbrough house had not been cleaned since a previous occupier.
There was a dirty used toilet, a mouldy shower curtain and used cooking
utensils etc. How was the young man to know whether the previous occupant
maybe had the virus? There were no cleaning materials around. The young
single man was forced to sign for the house – at least it was a one bedroom
house.

Mears are thus not providing decent clean ‘fit for purpose’ housing as defined in the AASC (asylum housing) contracts for many people dispersed from Urban House. Most are still going to shared housing where self-isolation will be impossible. Mears should close Urban House and provide emergency hotel accommodation where people can self-isolate.

‘Christine’ who was in Urban House then in a Mears isolation house in
Newcastle is now in Sheffield. She has fully recovered and is in a clean room
and decent house, but a shared house with two other women.

What about those people already in Mears asylum housing?

Mears claimed in their 6 April statement that translated information on Covid-
19 had already been sent to homes.
“Guidance for Service Users distributed (including COVID-19 Symptoms,
understanding social distancing and possible lockdown),handwashing
techniques which has been translated into 12 languages”
But Mears had claimed to have done this before. On Saturday 28 March, Mears
issued a statement to the Independent saying that the company
‘Has ensured that all service users have translated guidance on how to
respond to Covid-19 and what is required of them.’
Weeks into the Covid-19 epidemic and two days into the lock down period, on
Wednesday 25 March, I rang Mears tenants to ask whether they had received
any information about the Covid-19 health emergency. No one had received
the ‘translated guidance’

On Monday 13 April I rang round 10 Mears tenants in various parts of the
Mears contract area: in South and West Yorkshire, Tyneside and Teesside, to
ask whether they had received written material in their own language on
Covid-19 from Mears. Some said they had received Boris Johnson’s letter on
Monday 6 April – in English.

So, the second Mears statement was untrue – a second lie

And still Mears are procuring slum housing and making tenants suffer
Over the Easter weekend Elaine and her two children of 20 and 14 contacted
SYMAAG from a Bradford house in a street at present with houses selling at
£45,000.
The family had literally been overrun by mice for months. See video Mouse in bedroom (1)  sent to us by the family on Friday 10 April. The family moved from
Urban House into the terraced house next to a derelict property on 23 January.
Neighbours said the previous tenants had been forced out because of mice
but Mears still put the family there.
This family have been ringing Migrant Help from January about this problem.
Mears came but their poison boxes had little effect Very recently a church
group took pity on the family and brought vermin poison but again with no
effect. Again, the family have continually rung Migrant Help about their situation. The family are kept awake by mice running everywhere. The young teenage son is terrified and sleeps with his mother.
You do not have to be a housing expert to understand that the origin of the
infestation is the derelict house next door. The family should never have been
put there. We are trying to get them moved to decent accommodation.

In 2016 in Parliament a Labour MP told one of the G4S contractors for asylum
housing
“You buy up cheap homes in some of the most deprived
communities and you’re making money out of housing some of
the most vulnerable and poor people”.

The Mears Group are doing exactly the same

In January Cllr Paul Wood chair of Sheffield City Housing told SYMAAG
‘I intend to instruct officers tomorrow (16 January) that the policy of
Sheffield City Council is that we want this asylum housing contract to revert
to the Council. We will push for the Mears contract to be terminated by the
Home Office. I think the job of a local council is to do its best to make sure
that all its residents have safe and decent homes to live in.’

SYMAAG agrees We will continue to press for the Mears asylum housing to be terminated by the Home Office.