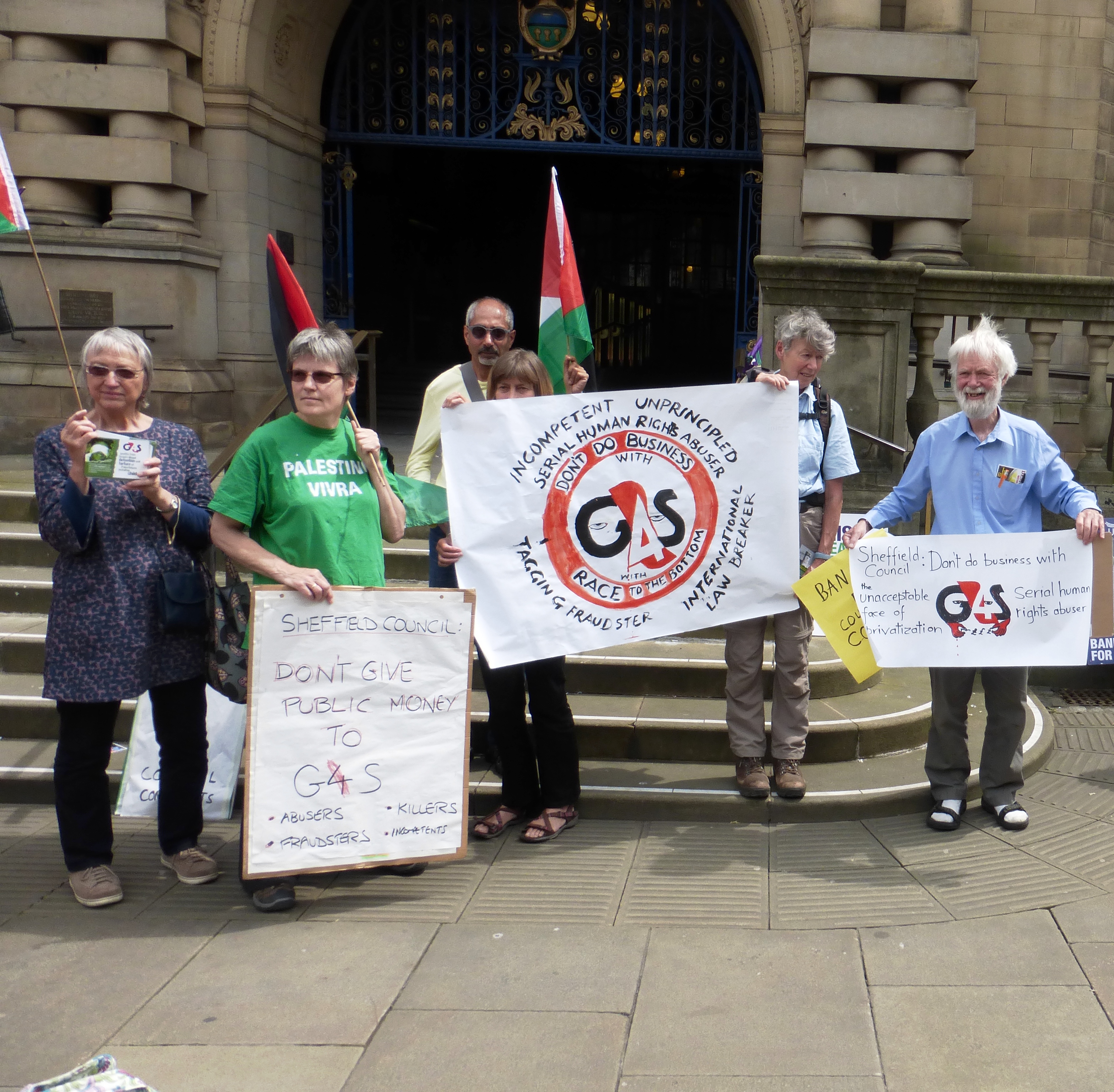 07Jul
Update 23rd September: Confirmed that South Yorkshire Stop G4S will resubmit the petition calling for Sheffield City Council to refuse to make contracts with G4S or other companies guilty of “grave misconduct” and will address the full Council meeting on October 1st to this effect. Councillor Ben Curran will also put a motion to the meeting on “ethical procurement practices” which we believe must exclude G4S (see http://sheffielddemocracy.moderngov.co.uk/ieListDocuments.aspx?CId=154&MId=5628&Ver=4)
South Yorkshire G4S will be holding a lobby of Sheffield City Council on Wednsday 1st October from 1pm at Sheffield Town Hall. Come and join us.
Latest news: after a statement at the July Council meeting that “the Council did not currently have any contracts with G4S” (see point 4.1.1 on minutes of July Full Council meeting at http://sheffielddemocracy.moderngov.co.uk/ieListDocuments.aspx?CId=154&MId=5627&Ver=4) we received a letter from Sheffield City Council apologising for misinforming us and stating that it in fact currently has 3 contracts with G4S worth around £91,000.  See Sheffield Council G4S letter 4th Aug 2014
Next Sheffield Council Meeting October 1st
We will be attending and speaking at the next Sheffield Council meeting on October 1st. We’d be happy for you to join us, ask questions at the meeting and push for Sheffield City Council to adopt a contracting policy which excludes companies like G4S on the grounds that that they profit from human rights abuses in Sheffield, in the UK and around the world.

**********************************
Sheffield Stop G4S campaign presented a 700 strong petition to a full council meeting of Sheffield City Council, calling on the Council not to award contracts to G4S on July 2nd.
No Contracts with G4S
The Council, in its verbal response to the petitioners, confirmed that the Council do not currently have any contracts with G4S. Labour Councillor Ben Curran, responding to the petition on behalf of the Council, informed the meeting that while the Council have been advised that it would be unlawful for them to adopt a blanket policy of excluding G4S from any tendering process, they are very aware of many of the concerns about G4S that were outlined in the petition, although he acknowledged that there were some matters of which he had only limited knowledge. He further explained that the Council do have a process whereby specific criteria are considered in any tendering process, and that these are designed to consider matters including fraud or criminal behaviour by companies bidding for contracts.
Tendering Process to be Tightened Up
Councillor Curran said that it was very possible that it was as a direct result of the criteria used by the Council that G4S currently hold no contracts with the Council. He went on to say that the Council had decided to review its criteria in order to further tighten its tendering process and that it was unlikely that G4S would win any contracts with the Council unless it changed its behaviour.
Changed Behaviour
In response to questions from members of the StopG4S campaign in the public gallery asking for more detail about the review of the criteria, Councillor Curran invited Stop G4S campaigners to meet with him once a draft of the revised criteria is prepared. Councillor Curran’s view was that if G4S were to be awarded any contracts with the council in the future it would only be if the behaviour of the company changed.
Legal Advice
Councillor Curran was also questioned about the legal advice the Council received and the Council meeting was reminded that human rights lawyer Daniel Machover has stated:
Under EU competition law and the 2006 Public Contract Regulations, a public body will act unlawfully if it directs itself wrongly on its discretionary power to exclude an economic operator from bidding for a contract where that operator has committed an act of grave misconduct in the course of its business or profession.
Resolution
Later in the Council meeting a resolution calling on the Council to exclude company’s with bad human rights’ records from bidding for Council contracts was discussed. The resolution was proposed by Green councillors and supported by Labour and Liberal Democrats (the new UKIP councillors abstained). The full resolution is below.
Later in the Council meeting a resolution opposing unpaid forced labour (workfare) for unemployed people was passed. G4S recently won a £60 million share of the £300 million ‘Help to Work’ workfare contract. If Sheffield Council are prepared to exclude companies from bidding for contracts on principled ethical grounds, there’s no shortage of evidence for G4S.
Sheffield Stop G4S campaigners welcome the response of the Council and see the Council’s stated views as a positive step towards ensuring that Sheffield becomes a G4S free zone. We hope other councils will follow Sheffield’s lead.
thanks to Hilary Smith for her original report, July 2nd 2014
The next South Yorkshire Stop G4S Campaign meeting is Wednesday 16th July 4.30pm at Exchange Brewery, 2 Bridge Street Sheffield S3 8NS. Come along, there’s work to do!