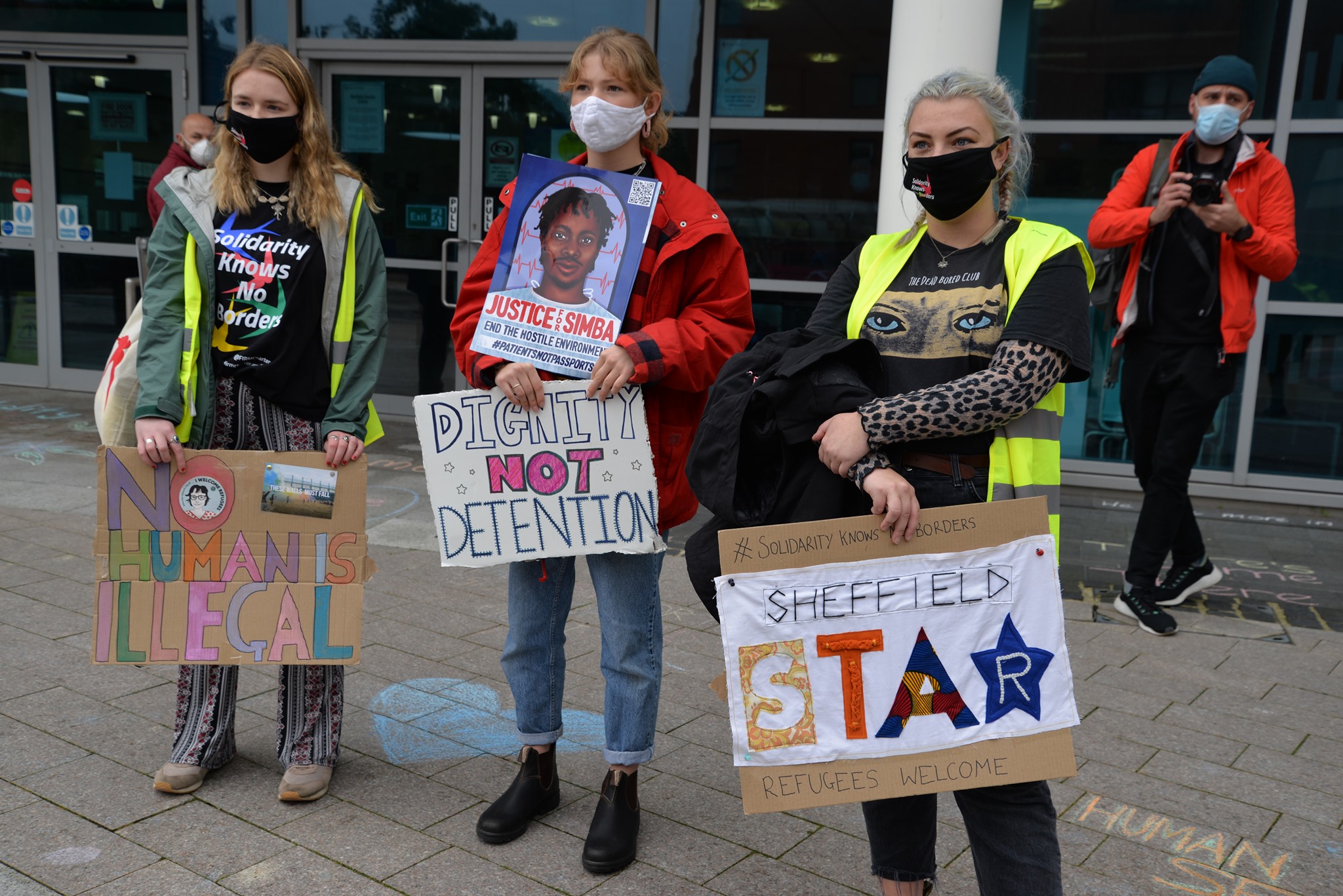 Sheffield says Justice for Simba, Justice for Jimmy Mubenga, end the Hostile Environment. On October 11 and 12th SYMAAG was part of national days of action under the banner ‘Solidarity Knows No Borders‘.

Around 100 people took part in decorating Vulcan House, Sheffield Home Office to make it a “Hospitable Environment” followed by a protest outside Vulcan House on Monday with the Justice for Simba Campaign, Sheffield Student Action for Refugees, Medact Sheffield and many others.

Report from Migrants Organise on the weekend of action

Amidst renewed attacks by the Government on migrants and the immigration system, migrant groups and community organisations in over 20 locations across the country took action this weekend under the banner of ‘Solidarity Knows No Borders’.

For decades, migrant communities have been subject to an increasingly restrictive, punitive and racist system—accelerated by recent ‘Hostile Environment’ policies, which embed immigration controls across society, including into education, housing, healthcare and beyond.

Across the country this weekend, groups also put up posters in solidarity with the #JusticeForSimba campaign, which demands justice for Simba Mujakachi who was charged over £100,000 for his life-saving NHS treatment because of his immigration status. People put up posters demanding an end to the Hostile Environment in different places across the country, and other groups held protests in support of his demands – including in Manchester, Brighton, and Sheffield (which Simba and his partner Melissa joined).

This Monday 12th October was the tenth anniversary of the death of Jimmy Mubenga, who suffocated whilst being held down by G4S guards on a British Airways deportation flight. On Monday, several groups – including in London, Oxford Sheffield, and online in Liverpool, held socially-distanced candle-lit vigils to remember him and all those whose lives have been destroyed by the barbarity of British immigration policies.

“This weekend of action, organised by migrant community groups, is only the start. Around the country more people are joining the movement to demand an end to the racism of the immigration system, and for a move towards a framework of basic rights, some of which are now set out in the FIRM Charter document. Realising these rights—the hopes and dreams of so many of our members—will only happen if we, together, build a mass movement able to bring it about. Now is the time for us to do this!”

“I have seen my friends die unnecessarily as a result of Hostile Environment policies. It could’ve been me. At CARAG, we are taking action not only to raise awareness about these injustices but also to see an end to them. We believe that people affected by a problem are best placed to find the solutions. Our common cause is our lived experience of the UK immigration system. That is why we need to build a migrant-led movement for justice now.”

You can also find out more by checking out the #SolidarityKnowsNoBorders and #SKNB hashtags on Twitter (click here and here!).

Make sure you sign the Fair Immigration Reform Movement (FIRM) Charter to join the migrant-led movement for justice, based on common respect for basic rights, and on the principles of justice, dignity, and welcome.

If you’re interested in finding out more about the FIRM Charter, and being part of the movement for migrant justice, then get in touch with aliya@migrantsorganise.org or maymuna@migrantsorganise.org. You can also check out our organisers’ Solidarity Knows No Borders toolkit here.