“It’s Kill or Be Killed” – Refugees and the Syrian Uprising: SYMAAG meeting 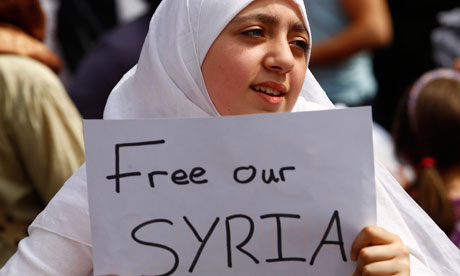 10Oct
We were pleased to welcome two refugees from Syria to our last meeting on Tuesday 30th October who gave us an update on events in Syria.
One was a long-standing refugee in Sheffield and the other, a man who had gained asylum in the UK after leaving the Syrian army and getting out of the country. They described the present situation for opponents of the Assad dictatorship as “it’s kill or be killed” and told us about the difficulties facing the many Syrian people who leave the country looking for safety in Turkey, Jordan and Iraq.
A few Syrians have come to the UK looking for safety – around 100 per month, compared to 10 per month before the uprising. Despite the all too obvious dangers facing opponents of Assad in Syria, the UK Border Agency refuses to rule out deportations to Syria, see http://www.ukba.homeoffice.gov.uk/sitecontent/documents/policyandlaw/countryspecificasylumpolicyogns/syriaogn?view=Binary