‘How do we get out if there’s a fire?’ G4S tenants live in fear 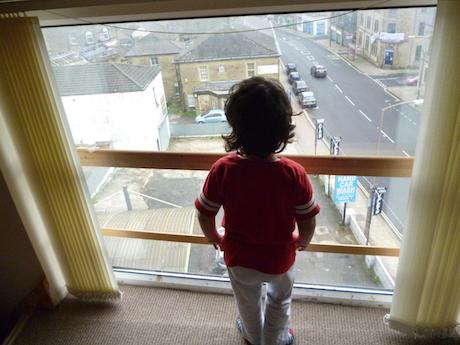 G4S asylum housing is “a disgrace” according to a recent Parliamentary Committee report. Many asylum tenants can – and have – testified to confirm this statement. But while John Grayson was investigating a G4S asylum hostel in Halifax, West Yorkshire the Grenfell Tower fire happened.

The first named victim at Grenfell Tower was Mohammed Alhajali, a Syrian refugee. We don’t yet know how many people were killed in the fire but reports suggest that some survivors are reluctant to come forward to seek support because of fears that their irregular immigration status would leave them open to deportation or detention by the Home Office

John Grayson’s latest investigation into asylum housing shows how the disregard shown by G4S leaves tenants in substandard and dangerous conditions. One man in the top floor of the Halifax asylum hostel explained “I watched that place burn. I thought I couldn’t get out of this flat if there is a fire”.

Asylum tenants in G4S housing have complained about conditions and lack of respect – despite fears of reprisals and threats by G4S of deportation. In May there were 4000 complaints (from 5000 G4S-run asylum houses). We have documented the inadequacy of G4S’ response many times. We even helped to make a short film – The Asylum Market – about it

Given the fire risk posed by the Halifax hostel – and how many other G4S asylum houses? – we demand that G4S act immediately to remedy the dangers identified by the tenants and publicised by John Grayson.

In the aftermath of the Grenfell Tower fire it was clear that all residents’ complaints had been dismissed but particularly those from ethnic minorities. As journalist Dawn Foster wrote in the New York Times: “Black and South Asian survivors told me the implicit message from everyone they contacted before the fire for help with the building was ‘you are a guest in this borough and a guest in this country, you have no right to complain,'”