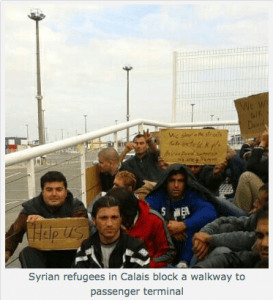 As more and more people flee the war in Syria, a small number of refugees have managed to reach Europe, seeking sanctuary.

Around 65 Syrian refugees are staging a blockade of the Calais ferry terminal, demanding to speak to a representative of the UK Home Office. Some are on hunger strike.

Last month at the G20 meeting in Saint Petersburg, David Cameron said that responding to the war and displacement in Syria was “…a moral imperative. This is the big refugee crisis of our time.” And yet the UK refuses to offer sanctuary to Syrian refugees.

It’s time that the UK government’s rhetoric on the Syrian war was turned in to action.

65 Syrian refugees have been staging a blockade of the Calais ferry terminal for over ten hours now, demanding to speak to a representative of the UK Home Office. Some are on hunger strike.

After fleeing shelling and persecution in Syria, the refugees endured further brutality in Europe. In the small French port town they have been subject to evictions from emergency shelters, destruction of possessions and repeated arrest.

The blockaders have therefore resorted to direct action to have their voices heard. They are refusing to leave until their demands are met.  In a town where the police act with considerable impunity on a daily basis, it is important that the blockaders receive solidarity from beyond Calais in publicising their demands.

The group of refugees say:

‘We are now demonstrating in the port of Calais, we will not leave until they let us go to England. We demand one person from the UK home office comes here to speak with us, and to see our situation. We have the right to claim asylum in england, but how do we get there? There is not a legal way to cross. We are about 65 people from Syria at the port at the moment, with our families, old women, mothers, children the youngest being three years old and friends.’

What You Can Do

this article first appeared on the website of the National Coalition of Anti Deportation Campaigns at http://ncadc.org.uk/blog/