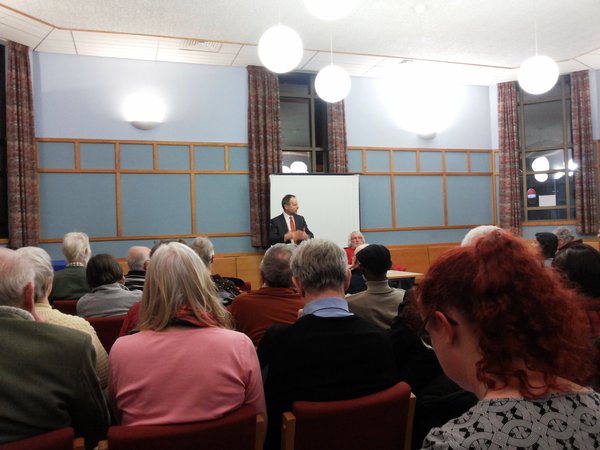 Over 70 people came to our January public meeting on the latest Immigration Bill. There was consensus that the real aims of the Bill were

But there was plenty of opposition and discussion of ways to monitor the effects of the Bill and to refuse to implement it. You can read a summary of its main provisions below.

To get a better picture of what happened at the meeting see this Storify account. Thanks to all who contributed to the meeting and for spreading the news about it – in particular Fran from ASSIST and Marcia for the main photo.

The Immigration Bill is not yet law and is still being discussed in the House of Lords. You can track its progress here.

A new year, a new Immigration Bill, a new attempt to stir up a “hostile environment” for undocumented migrants in the UK. According to Sheffield MP Paul Blomfield:

“To call the suggested measures dangerous would be an understatement. They vilify the exploited and, even worse, strengthen the hand of unscrupulous employers. The steps contained in the Immigration Bill not only risk forcing undocumented workers into exploitative employment relationships—supposedly outlawed by the Modern Slavery Act—but potentially give abusive employers even more weapons with which to threaten employees”

The results (aims?) of the Immigration Bill if it becomes law are likely to mean:

What can we do?

The Immigration Bill has already been voted through in Parliament (see how your MP voted here) and is now at committee stage in the House of Lords, where amendments are still possible.
If the Bill does become law, SYMAAG will work with others to create resistance to the Bill being put into practice eg trade union efforts to recruit and work with undocumented workers, monitoring the results of the landlord checks, publicising destitution caused to families due to asylum support cuts, supporting people who try to make “out-of-country” appeals against deportation.
This Immigration Bill, like the last one, aims to create a “Hostile Environment” for undocumented migrants. It also attempts to turn landlords, local authority workers, employers, bank workers, teachers, health workers into border police. We should refuse to play this role and support others when they refuse to.

Millions of people in the UK took action in support of refugees last summer: “Refugees Welcome” was the message and solidarity efforts continue with donations and trips to the Calais migrant camp and Lesvos and demands to give asylum to refugees. But – as the latest Immigration Bill shows – the battle for the rights of migrants, documented or not, doesn’t end when they reach the UK. As Lucy Mayblin of Sheffield University put it, writing about the Immigration Bill, “the boring bits matter too“.
**********
Find more about the Immigration Bill
with thanks to Banksy, Sam Musarika, Harry Stopes and John Grayson for art and photos