Barnsley, like other northern ex-industrial towns, is often stereotyped as racist and hostile to refugees. Refugees, including SYMAAG members, do experience some wariness, hostility and racism from some in a town still struggling to recover from the closure of coal mines and related industry since the 1980s. Austerity has taken its toll –  as boarded up shops on the outskirts show. The town has the lowest average pay in the UK and high unemployment.

The privatised asylum housing system – run for profit by G4S in Barnsley – tends to house a disproportionately large number refugees in areas with the cheapest housing in ex-industrial towns like Barnsley. Without extra resources for public services for all and without a properly funded and planned integration strategy problems can arise. Problems that racist and fascist groups have done their best to exploit. But some of the trade union organisation and pride in community of the coalmining era remains.

The Barnsley Community Support Centre, run by the Unite trade union, based in the headquarters of the National Union of Mineworkers, has organised ESOL classes for refugees. It has provided benefits and housing advice for refugees and locals alike with volunteers from around the world working alongside local ex-miners. Refugees have joined ex-miners in the Orgreave Truth and Justice Campaign. And refugees and locals have discovered that football is a shared language.

The Barnsley Community Support Centre, with support from Barnsley FC helped set up a very successful refugee 5-a side football tournament in 2016. Jaber (“Jimmy”) Abdullah (interviewed below) has been central to getting refugee football off the ground as well as helping refugees settle in Barnsley and linking them to the support and solidarity that still exists in the town.

The article below is by Johnny McDevitt and first appeared in The Guardian on May 2nd 2017.

Jaber Abdullah, a Sudanese asylum seeker, says he will never forget the day when Barnsley Football Club gave him tickets to go and watch the team play at their stadium. “It was the first activity any of us had done since we arrived in the UK because we could not afford to go anywhere,” says Abdullah, 40, who set up the Refugee Tigers football team shortly after arriving in the UK and claiming asylum almost two years ago.

Having been sent to live in the south Yorkshire town, he saved £3 from his £30-odd a week benefits, bought a football and started kicking it about in a local park. It wasn’t long before he was joined by another Sudanese asylum seeker. Within a few months, the Tigers’ roster had swelled to more than 50 asylum seekers and refugees from Syria, Eritrea, Ethiopia, Iraq and Iran, aged between 18 and 40.

The Tigers boast some unquestionably talented players, with the most eye-catching an Eritrean goalkeeper nicknamed “Tesco” (on account of his obsession with the variety of goods on offer at his local supermarket) and a Syrian midfielder monikered “Figo”, who shares the sorcerous skills of the Portuguese great, according to his teammates. “In Calais where most of the boys came to England from, there was a lot of violence, a lot of fighting between the different nationalities. They were arguing over things like territory close to the lorries and it was very tribal there, but now we are one family. Nobody cares where someone is from or what religion they are. We have many different types of Muslims and also Christians,” says Abdullah, who manages the team.

Coaching a team of penniless men who live in constant uncertainty comes with exigencies that Jaber’s idol, Jose Mourinho, does not have to face. “Some of my players are sent back to their countries and a lot leave Barnsley [when they are granted refugee status] for the big cities in search of work,” he says. “Of course, I am so happy for them that they can start to live their dreams. That is the most important thing. But also some of my best players leave and we need stability if we are going to be a great team. But every day we have new stars arriving in Barnsley to replace them so we have a good transfer system.”

Barnsley FC heard about the Tigers and donated kits, offered its Oakwell pitch for weekly training and its training ground for matches, and invited the squad to watch a game. The Tigers will be joining an amateur league next session. For now they play exhibition matches across Yorkshire. Sometimes it’s difficult for the players to find the £3 minibus money to travel and they have to borrow from friends, says Abdullah.

He says none of his players have ever been racially abused by the teams they play. But, as we speak, a car drives past and a young man cranes out of the window and shouts “Oi, blackie, fucking go home.” Anti-immigrant sentiment is not unfamiliar to Barnsley. Ukip came second in three of the four constituencies that dissect the town and there has long been a far-right presence, first with the BNP and now with the English Democrats. Members of the South Yorkshire Casuals II have marched through the town to protest against what they anticipated would be an incoming “horde of Syrian refugees”. But Abdullah ardently defends the town he likes to call his “mother in England” and says he has received more compassion than rancour.

A driver in Sudan, he fled the conflict in Darfur three years ago and flew to Russia, rather than crossing by boat to Italy from Libya because he is scared of the sea. He paid the mafia to take him across the border into Ukraine and then on through eastern Europe – to Germany and finally to Calais. He arrived in Britain hidden inside a lorry, with a small bag of possessions but armed with grand ideas about what life here would offer.

“I thought Britain was going to be a paradise, where I could get my wife to join me, become educated and fulfil my father’s dream for me to become a n aeroplane pilot,” he says. “But the [immigration] system has made my life very difficult. I want to work but cannot. I cannot go to school because I cannot afford it. I cannot open a bank account. I just have my team. For me Britain has two arms. One is the system that pushes me away, the other is the British people who hold me.”

After losing his asylum card four months ago he was evicted from his home and his benefits were stopped, but he was saved from homelessness by a local man. “He came and asked me how much I was getting a week from the government and said that I would continue to get that money from him. He drives to my home every week to give it to me. Last week he came with £100 to pay for my English classes. I tell him I will repay his kindness when I can but he says, ‘Jaber, when you have money to spare give to someone else who needs it’. I will never forget what this man has done for me.”

Jaber has taken on the mantle of a refugee envoy to Barnsley and is determined to change the minds of those who resent their presence.“ Although Abdullah has only £30 a week from the government he now gives some of his money to homeless people. “I say to them ‘this is Sudanese hospitality’. Neither of us will be hungry then.” Abdullah has become a de facto community leader to new refugees in the town. “When a new guy comes here, the Red Cross people say: ‘Go and see Jaber at his house.’ They have usually just come from Calais and have not eaten properly for a long time so I feed them, help them with their paperwork and show them where they can get English lessons.

“It is hard for the young ones. They thought it would be like heaven here. When they are stuck with nothing to do, sometimes for years, they become very depressed and some of them begin to go crazy. I tell them they must be patient while the government deals with their cases but I understand their anger. I am in the same position.”

Thoughts rarely stray far from home, with the conflicts that forced the Tigers’ players to leave. “We went to the moon and the depths of the sea and we climbed mountains. We have advanced in medicine and engineering and philosophy and in every science but we forgot how to build humanity,” he says. “We have lighting in our cities and roads but we have forgotten to light our hearts.”

As Abdullah approaches two years in immigration limbo – not knowing whether when or even if he will be granted refugee status – his mind remains resolutely fixed on the future for his blossoming Tigers.

The Premier League one day? “We have all had very difficult journeys and lost many friends to get here. You can see that nothing seems impossible to me,” he replies.

This article first appeared in The Guardian May 2nd 2017 https://www.theguardian.com/society/2017/may/02/jaber-abdullah-refugee-football-asylum-seeker-barnsley

Interview and picture of Jaber Abdullah by Johnny McDevitt

Some photos of 2016 5-a side anti-racist football tournament at Barnsley FC. Pics by Ian Parker and Brian Clarke. More photos at Barnsley Community Support Centre site. 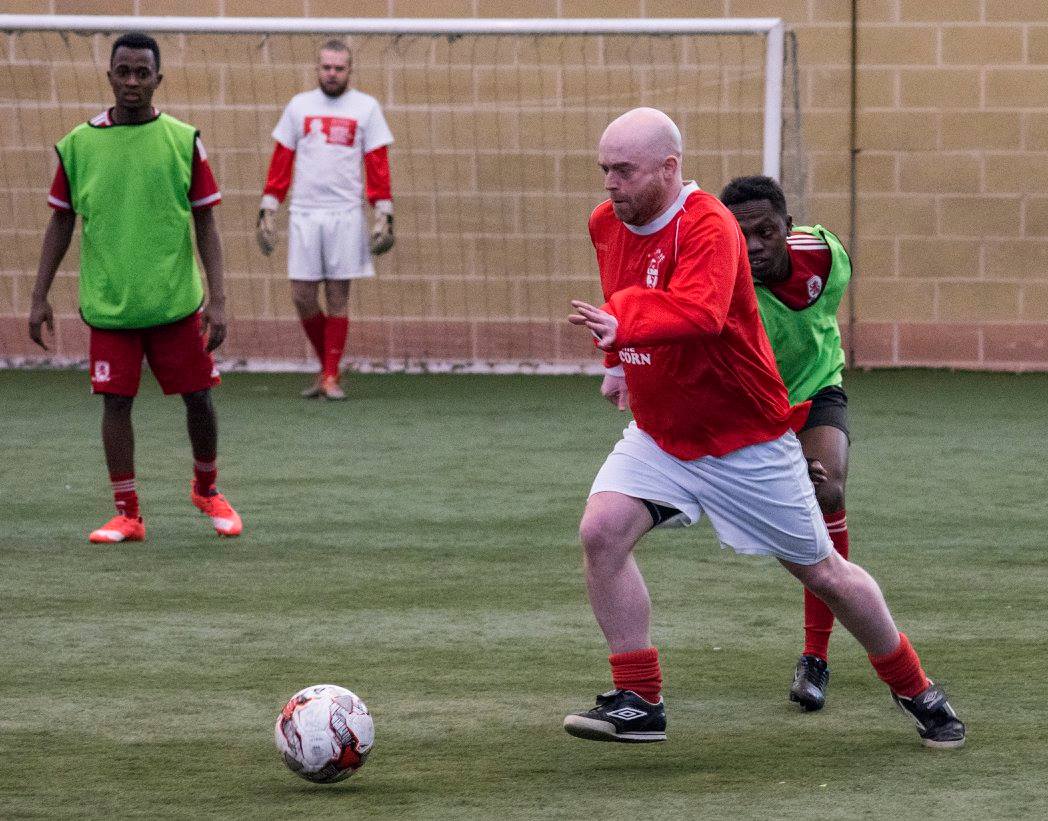 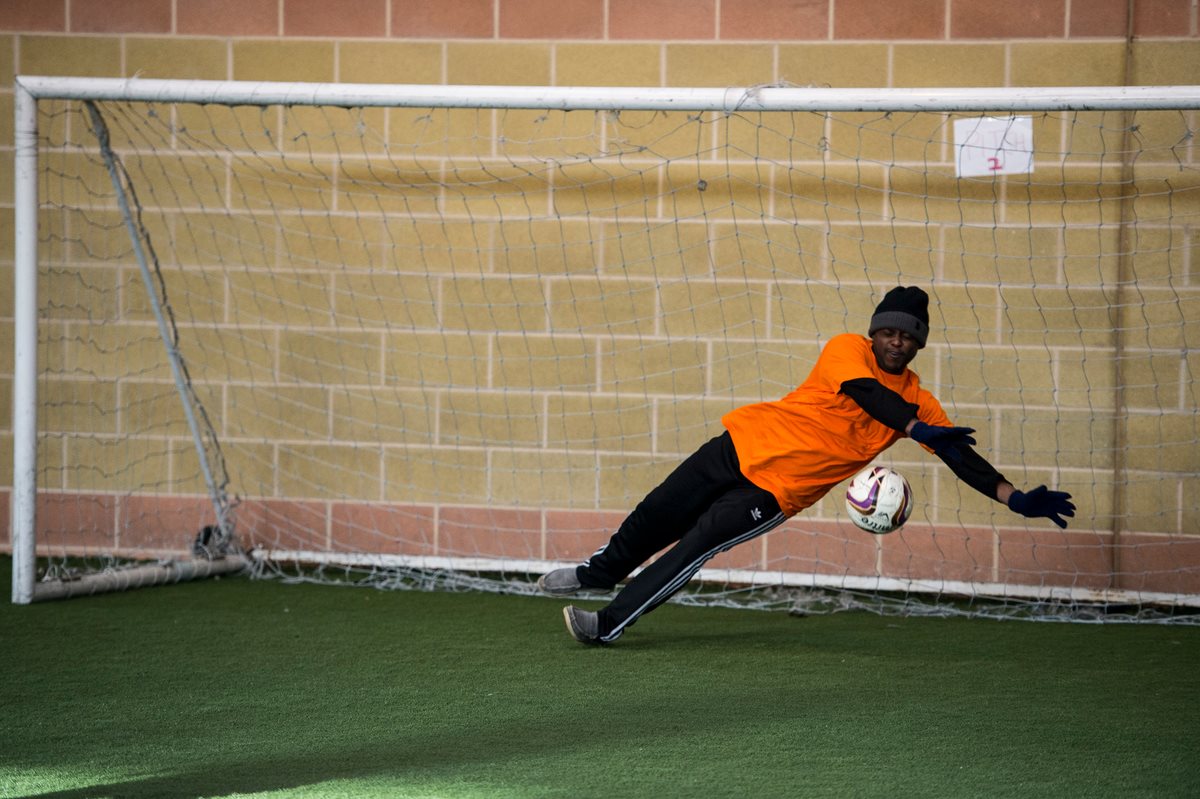 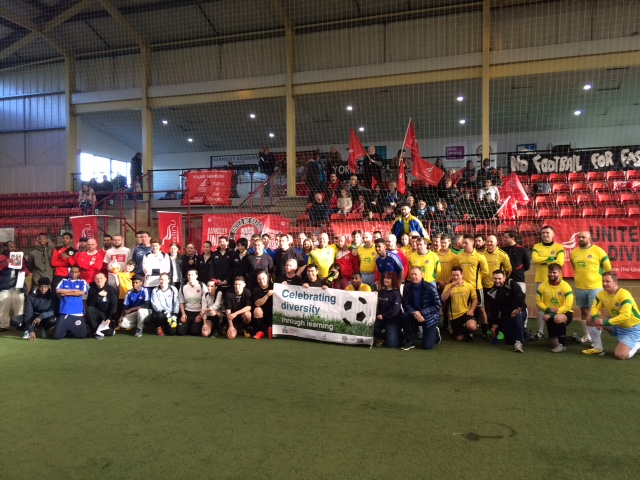 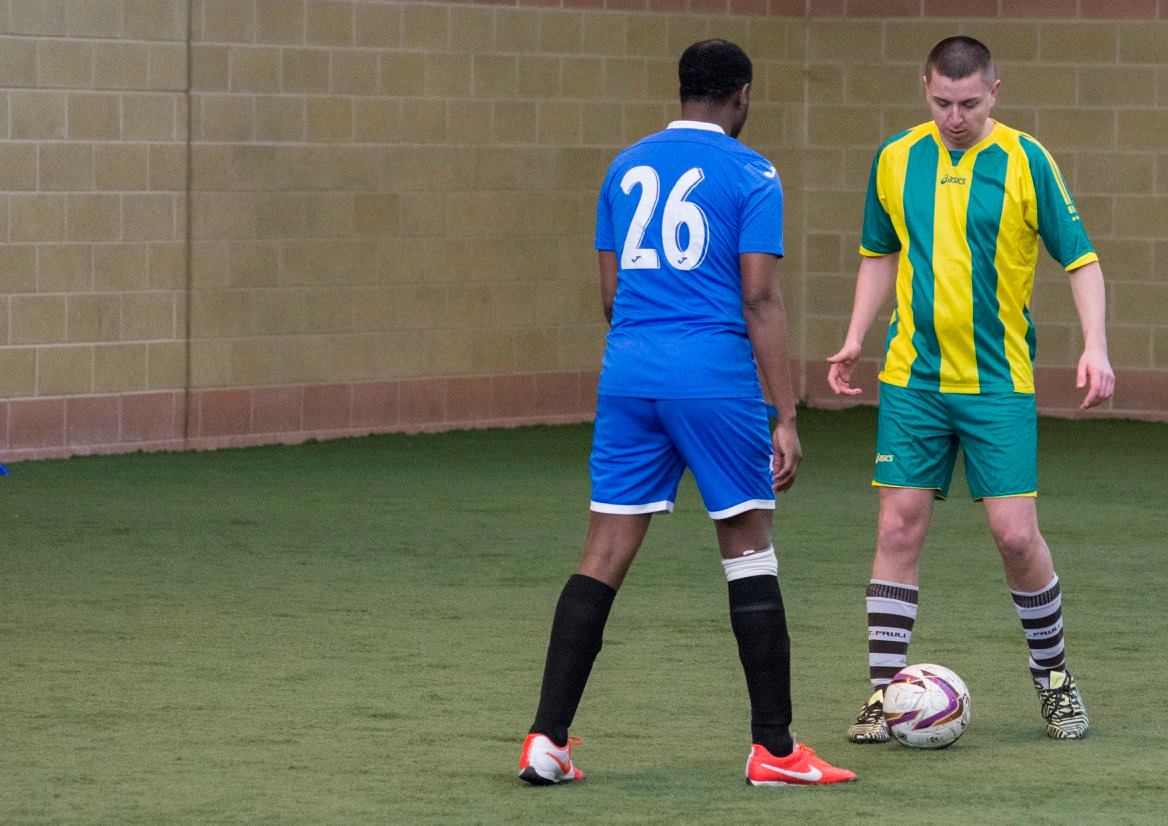 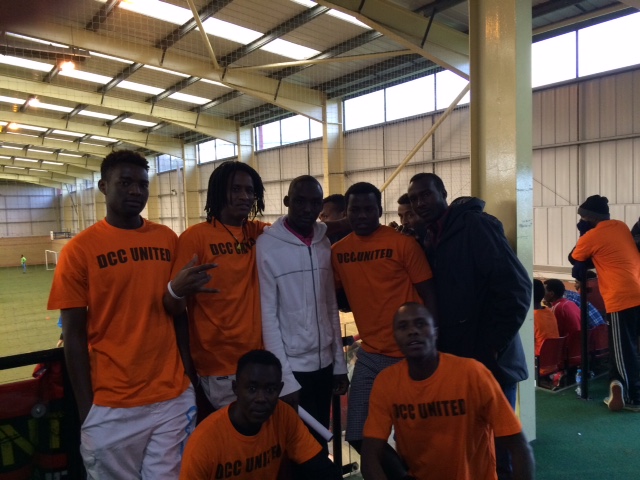 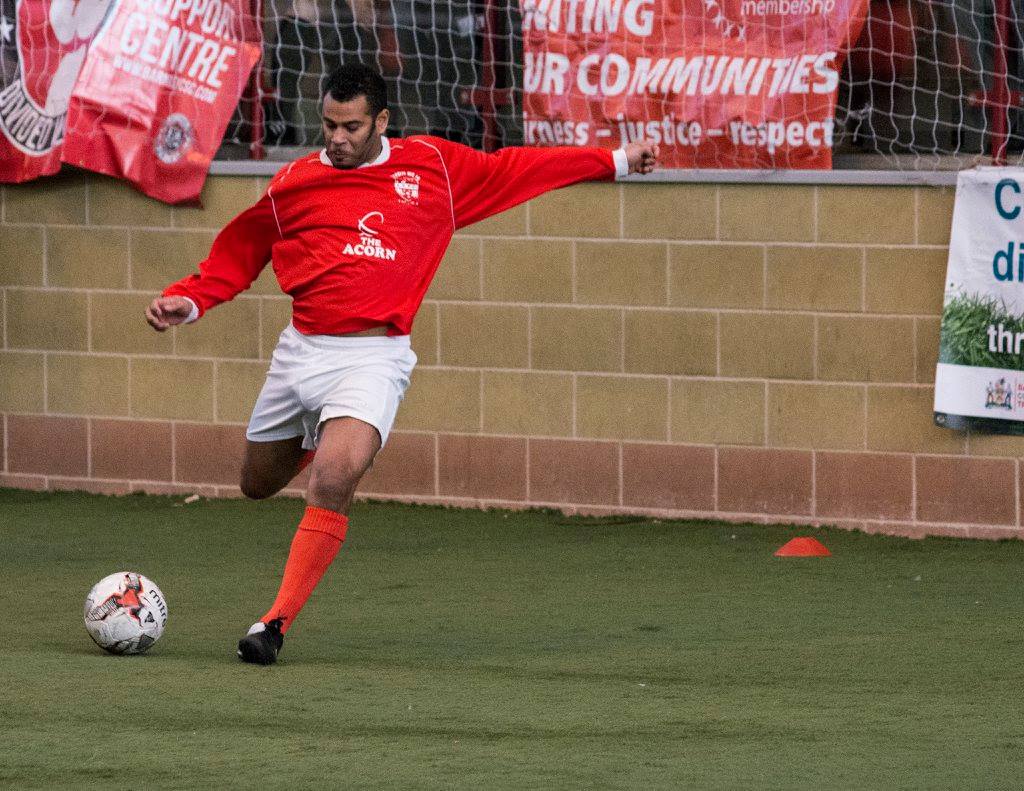 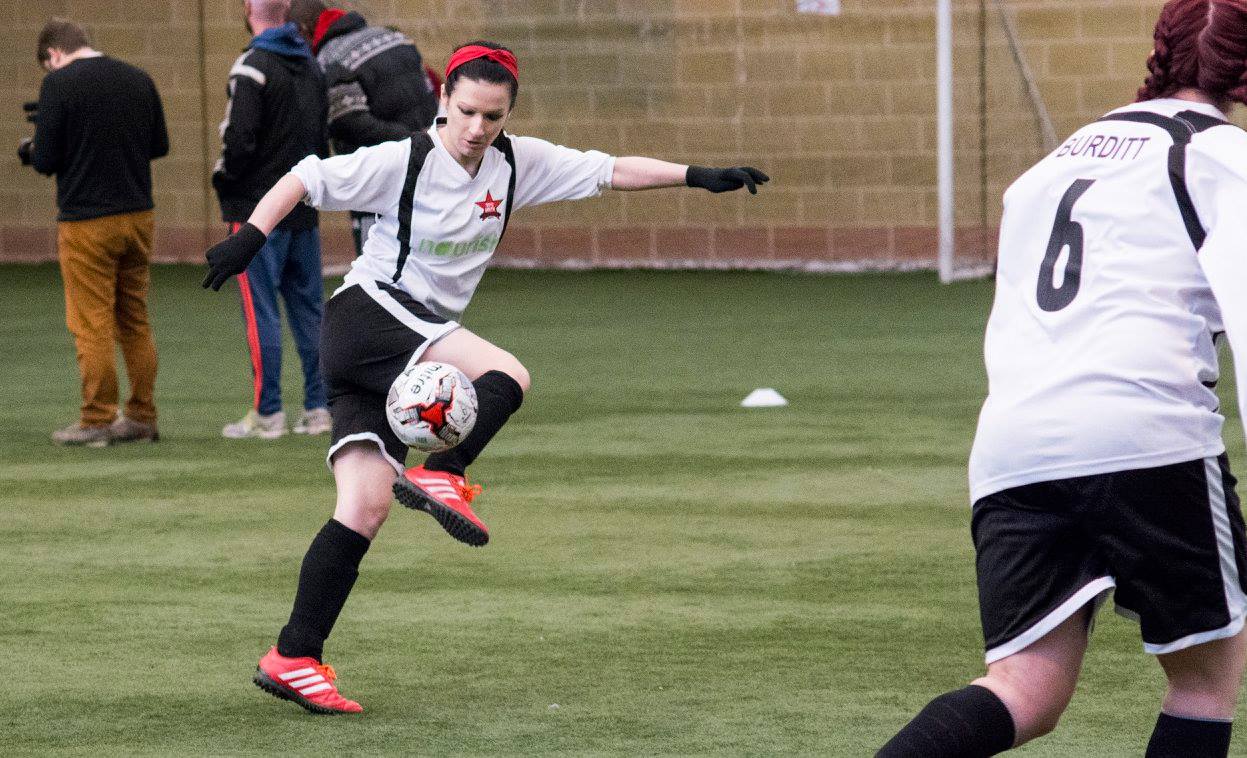